The shooting in Buffalo and the American heart

Purdue, what are you waiting for? 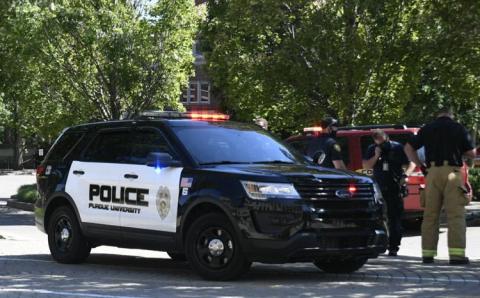 The Purdue University Police Department broke up a party of Purdue students, dozens of whom were later suspended by the University for failing to adhere to social distancing and mask-wearing guidelines.

It will be four weeks tomorrow since the last update from anyone involved in the Tuggle case.

It has been 43 days since Adonis Tuggle, a Black student in the College of Health and Human Sciences, took to social media with a video showing Purdue police officer Jon Selke using his elbow to hold Tuggle down in the snow.

It has been 48 days since the incident, marked in Purdue police logs as an arrest for “resisting law enforcement,” described by PUPD Capt. Song Kang as a “simple resisting case.”

Campus response flooded in 42 days ago.

Purdue President Mitch Daniels said then — 42 days ago — that the investigation would be “swift and thorough.”

The Black Student Union held its student-led town hall that day, and the second was led by Vice Provost for Diversity and Inclusion John Gates, who told attendees about Purdue’s five-year plan for changing the experience of Black students at Purdue. Gates said in that meeting that he expected the body camera footage to be released by the end of that week or the next. That was 23 days ago.

Yet, here we are. We have exactly the same information we did 27 days ago, when the special prosecutor reviewing the investigation was named.

Purdue has repeatedly urged people to hold off their judgements until the results of the investigation are released. Kang said on Feb. 9 he couldn’t say whether the video Tuggle released earlier that day was “going to have value.”

If we shouldn’t make judgments yet, and we’re not given the materials on which to base any judgments, are we just supposed to forget about it?

Kang referred questions about body camera footage in the case to Purdue spokesperson Tim Doty on Tuesday. So did an email from Gates’ office.

This is no longer in Purdue Police’s hands — it’s in Purdue’s. This isn’t a matter of determining whether PUPD did or didn’t serve and protect in this incident — it’s about Purdue’s image.

Doty has said multiple times he “(does) not have any timeline or update.”

Even Tuggle’s attorney, Andrew Stroth, who’s been quick to respond in the past, hasn’t responded to two calls this week for comment about any updates.

Everyone is waiting on Purdue, but what are we waiting for?

President Daniels, we hope you’re taking this extra time to follow through on your promise of a thorough investigation, but what did you mean when you said swift?

This is the opinion of The Exponent’s editorial board and was written by its managing editor.

There are currently 0 users online.